The long-term shortage of skilled workers in various trades has forced the government to seek a solution and, together with the Council of Craft Guilds, they decided to return compulsory subjects “crafts” and “gardening” to Czech primary schools within two years. The aim of this legislative measure is to bring children to craft, teach them new skills and find new craftsmen, from carpenters and masons to electricians. 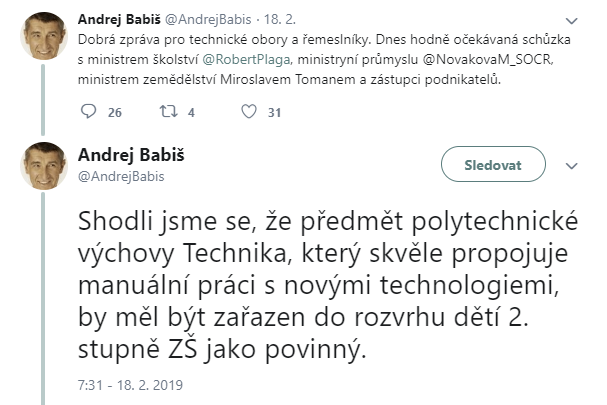 The principals of primary schools are irritated by the fact that the school system is changed in Prague regardless of actual situation. Martin Äerný, director of the Velká DláÅ¾ka 5 school in PÅerov, complained to the Právo daily in following words:

{QUOTE:It's all about the concept of primary schools. If they want to reintroduce “crafts”, they have to say instead of what. It has no concept. We have already abolished optional subjects due to the compulsory teaching of foreign languages. When they do the same with the crafts, there is no more space left. So, some compulsory subjects should be cancelled. I don't know how they want to do it.;;Martin Äerný}

“Crafts” and “gardening” have been slowly disappearing from the teaching program since about 1998. The premises that were used for them at the schools were often rebuilt for other purposes. Although there are still several primary schools, which use their workshops up to this day and offer technical education as an optional subject. What about the schools that do not have their workshops?

Michal Parlásek from the Information Education Centre in Pilsen pointed out that not every school has the possibilities and conditions for building a school workshop or restoring the original workshop.

{QUOTE: Therefore, it should remain the school's decision how much space it will be able to set aside for technical education.;;Michal Parlásek}

Moreover, it is not entirely the case that children do not learn to work with their hands. Today, there is the program Man and the world of work for the first grade of primary schools, which includes subjects such as Design activities, Growing activities, Work with small materials and Food preparation. Compulsory. For the second grade, there are the subjects such as Use of digital technologies, Design and construction and a compulsory subject directly called the World of work. 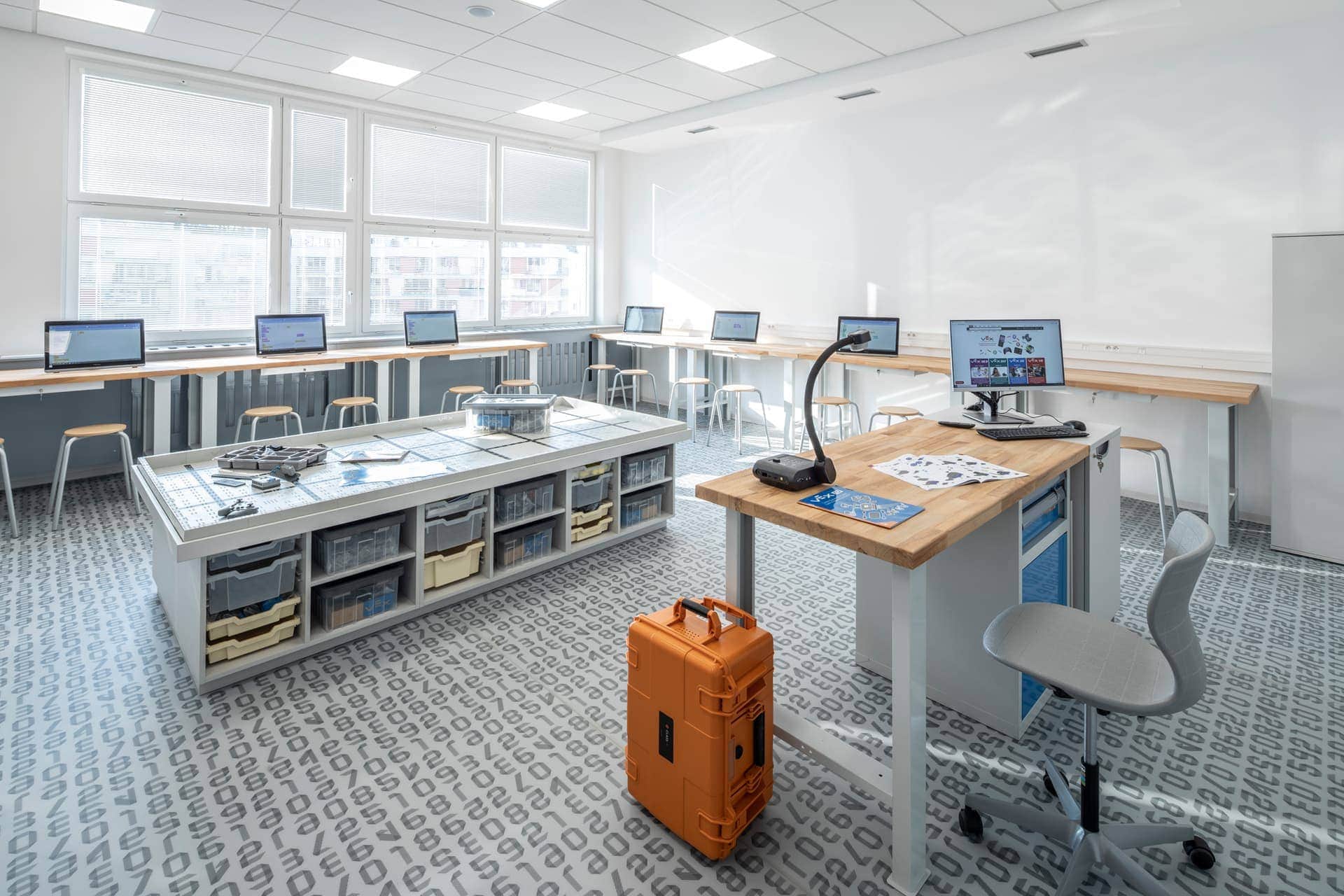 A donor of cabinets is being sought

Of all issued trade licenses, craft professions represent 27 percent and are also the basis of service for urban and rural areas. Industrial and construction production is the basis of employment in the Czech Republic. But the number of craft workers is constantly declining. Where should schools take money to equip the workshop so that they can provide the compulsory education? Will they get a contribution from the government? Hardly or little. The schools will have to invest in workshop cabinets, benches and tools on their own or find a sponsor.

Well, even if the school equips itself, will it have material for the job? Nowadays, it is not so easy to get (preferably for free) nice wood. No joiner’s shop donates quality boards to the schools, but perhaps at least cuttings and scraps. From this, children can make birdhouses or some stands. This will probably not lead to a significant increase in those interested in the profession.

It's time of robots, kids don't need manual skills. Or?

Looking at the changes of the last few years and thinking about the future, the question arises as to whether it is even necessary today for the next generation to work with their hands. Production is being automated and robots take the place of humans, but someone must be able to set them up, program and also invent. Markéta Majerová from Scio says:

{QUOTE: Our education system certainly needs a number of changes so as to meet the demands of the 21st century. Greater emphasis in schools should be placed on the development of critical thinking, media literacy, working with technologies and the development of the so-called soft skills.;;Markéta Majerová}

I agree with Tomáš Dombrovský, an analyst from LMC.

{QUOTE:While we expect children to learn design thinking in schools, which is about greater independence and the search for non-standard solutions, we are discussing hoeing the garden. Design thinking is a discipline in which, according to companies, current graduates are failing terribly. Theoretical knowledge is quite good, the ability to apply it in practice is significantly worse and the graduates are worst in search of their own solutions.;; Tomáš Dombrovský}

Another unanswered question is who will teach these subjects. It probably cannot be a math teacher. We will have to wait a few more years for the benefits of the old-new compulsory subject. That is, at least until the first pupils enriched with this teaching leave primary schools.

Do you need advice?

Go to the blog

Emancipation not only gave women the right to vote, but especially brought an overall change in thinking. Women began to believe more in their abilities and gradually became involved in professions that are traditionally considered as suitable for men. Today, no one demur at woman programmer, judge or top doctor (although the first Czech doctor of medicine graduated only in 1902!).

Can today's bench survive the next generation? Workshop furniture and Industry 4.0

The 4th Industrial Revolution interconnects the worlds of advanced information technology and the manufacturing industry. It brings technological as well as social changes in the industry - according to estimates, productivity will increase by up to 30% and up to 40% of people will have to change their qualification. Are we ready for this? Who will need current workbench?

Today's child imagines an office desk and chair under the term workshop furniture. And what about L-profile, calliper or circular saw?

Many people think that today's children are lazy, ponderous and clumsy. But only few people are thinking about why this is the case, if it is true at all, and to what extent. It was normal for earlier generations to fix things, not only at work but also in their homes. Every man used to have a classic bench in his garage or workshop, and workshop cabinets, workbenches and various tools were the daily bread of most employees. Today's children do not have such a background at home neither in schools as before.

Read the article
Previous Next

By sending the form, you express your consent with the storage of personal data in accordance with the provisions of § 5, paragraph 2 of Act No. 101/2000 Coll., On the protection of personal data, as amended. You agree that your personal data provided by you hereby will be processed and kept in an electronic database, only for the purposes of tenders and for a maximum period of 1 year. The consent may be revoked at any time in writing or electronically.

We use cookies to analyse website traffic and features, remember your preferences and personalise content and ads. We share information about how you use our website with our social media, advertising and analytics partners, who may be based outside the EU. These partners may combine this information with other information that you have provided to them or that they have received as a result of your use of their services. Detailed information
Only necessary cookies Accept all Manage cookies

Required cookies
We need to store these cookies in your browser to make sure you see our website and that it works properly. Essential cookies are always enabled.
Functional cookies
Functional cookies help our website to make your visit more enjoyable. They may be set by us or by third parties whose services we use on the website. If you do not allow cookies, some or all of these services may not work properly.
Analytical cookies
They help us track the number of visitors and the source of traffic, which allows us to improve the performance of the website. They help us identify which pages are particularly popular and which are unpopular, and track how visitors move around the site. We only use aggregated data, of which we do not know your identity. If we use third-party cookies, our partner may link this information to other information they have about you, for example because you use their services. If you do not allow cookies, we will not know when you have visited our website.
Advertising cookies
These cookies may be set by advertisers on our website. They may use them to create profiles about your interests and show you advertisements on other websites based on these profiles. However, they do not store your personal information directly, but through unique browser and internet device identifiers. If you don't allow them, you will see less targeted advertising on the website.
Only necessary cookies Accept all Accept